The Case of the Chagrined Chandelier

Background:
The two+ story foyer of a large home was furnished in part with a $73k French crystal chandelier and a $23k round table placed directly below the chandelier. 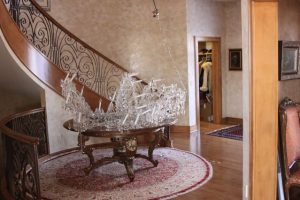 The owners were living elsewhere at the time but the home had a caretaker who, upon leaving at 5:00 PM, noted that all was in order. Upon arriving at 8:00 AM the next morning he found the chandelier on top of the table, both irreparably damaged.

Analysis:
TI was requested to determine the cause of the damage and to assist with subrogation, if warranted. Upon examination of the evidence, TI immediately came to the conclusion that the chandelier did not fall to the table but, rather, it was lowered by the electric lift which allowed it to be brought down for cleaning and bulb replacement. The chandelier self-destructed of its own 190-pound weight on the table. The home’s security system showed no breach of security.

TI recovered the chandelier and uninstalled the chandelier lift from the attic of the residence. The design and function of the control system for the cable lift was investigated and extensively tested. TI’s investigation determined that the control circuitry for the cable lift was constantly energized even though the lift might only be operated once or twice a year and that a power surge would cause the control to turn on the lift. Based on TI’s extensive knowledge of electronic controls, the opinion was rendered that the control was inherently and unnecessarily dangerous. A simple center-off rocker or toggle switch would have been equally convenient for the user but would have denied power to the control other than when in use. A formal joint inspection and test session was conducted and the matter was taken to appraisal. TI’s client recovered 100% on the loss.