The Case of the Dead Diesel

Synopsis:
The complexity of modern machines often renders them vulnerable to the slightest defect. A heat treating error on a minor component takes down this large, 16-cylinder diesel engine.

Assignment:
TI was requested to determine the cause of the engine defect. 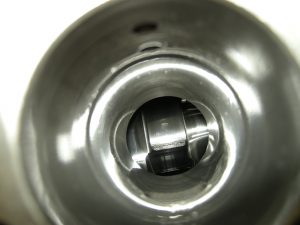 Analysis:
The engine had less than 80 hours run time but the generator set had recently gone off its 2-year warranty and warranty coverage was denied. The fuel pump for the dead cylinder was pulled and a photo taken down the bore showing that the tip of the camshaft lobe was in a highly damaged condition. The engine was disassembled and it was discovered that the camshaft rollers that operated all 16 fuel pumps were in degraded condition. The edges of the rollers were chipping away and the chips were being rolled over on all 48 of the camshaft lobes, including those for the intake and exhaust valves. Thus, the camshaft, 16 fuel pumps and 32 valve rollers were a total loss. 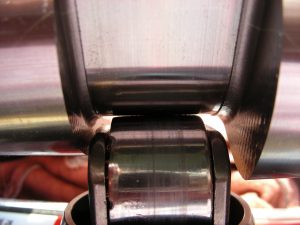 Further investigation of the valve and fuel pump rollers found that they had a thin, extremely hard and brittle outer shell and an unhardened inner core, and that the shell was breaking in the manner of a boiled egg rolled under pressure on a counter top. The originally cylindrical rollers were deformed with the ends mushing out, creating a crowned condition. TI met with regional representatives of the engine manufacturer and appealed the non-warranty decision as an original manufacturing defect resulting from defective heat treatment of the camshaft rollers. After review at the engine manufacturer level, the damage was repaired under warranty.