Case of the Wet Water Plant

Synopsis:
Sometimes the saying “They’re the same, only different” gets you in trouble when they really aren’t the same. In this case, Professional Engineers and contractors take a bath when PVC pipe is treated the same as steel.

Assignment:
TI was requested to determine the cause and extent of damage, and subsequently, to provide details of errors by design engineers and the mechanical contractor’s personnel. 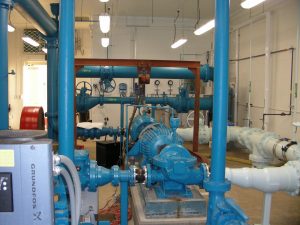 Analysis:
The pumping station served two primary purposes: boosting pressure of the municipal water system to serve an elevated portion of the city, and providing high volume, high pressure water for fire-fighting operations when required. The previous pumping station had been plumbed with steel pipe but the new station was entirely in PVC pipe. TI expedited a site inspection within 24 hours of receiving the assignment, and only four days post loss. 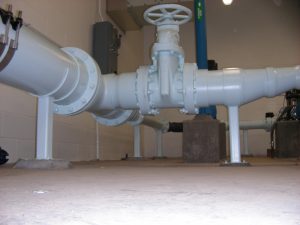 It was immediately noted that even though the facility was very professional in outward appearance there were numerous, serious errors in the piping system. Thus, a copy of the design drawings was obtained and compared with the facility as built and this confirmed several major design errors by the Professional Engineers who designed the pumping station. As an example, the valve in the center of the photo weighs over 400 pounds and yet it is hanging unsupported other than by the ends of plastic pipe. Additionally, the few supports that were present provided no lateral support whatsoever.

The piping system as built was also inspected and major construction errors by the mechanical contractor were also noted. In particular, flanged joints were not aligned prior to torqueing flange bolts, resulting in stress on the fittings and pipe. The assembly of pipes to flange adaptors also showed serious lack of bonding between the two. The failure was initiated at a poorly assembled 4 inch flange joint that had an unsupported 60-pound valve hanging on it, with the other end of the valve hanging on a rubber flexible adapter. Thrust from the broken 4 inch pipe broke the 6 inch pipe to which it was adapted. The broken 6-inch pipe had an unlimited supply of 80 PSI water from a water tower. When the water depth in the plant exceeded 4 feet the double door of the building blew open, releasing the flood.